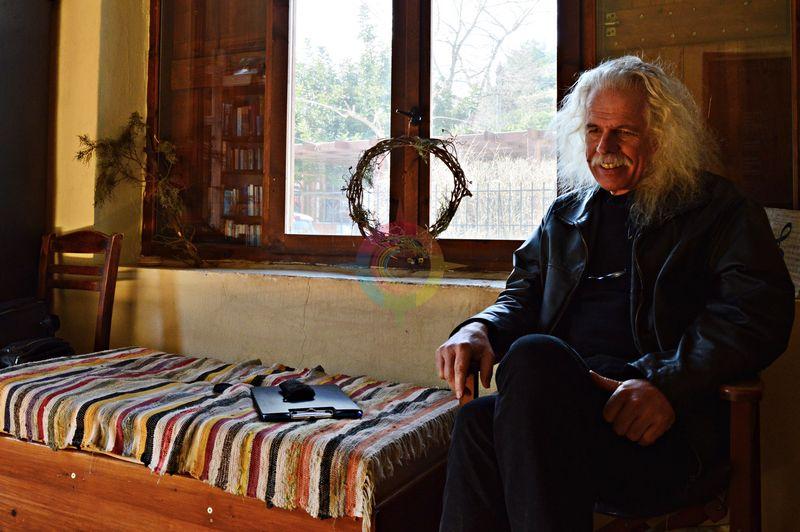 Being friendly, with interesting views and a restless spirit is maybe the other side of Ross Daly, the musical traveler. We met him in the Lavirinthos Musical Workshop and he talked about himself, shared his view on Cretan Music and answered questions on social issues as he is a very political human being.

Is Crete for Ross like an Ithaca for Odysseus?

Crete for me is a place I discovered in the 1970s and it is something that I did not decide but happened- as all the things in my life.

How different visually and emotionally is Crete of your first arrival with the today’s Crete?

It has huge differences. The fact that, now, Crete has democracy is an important difference.

In the past Crete was much simpler. All the characteristics of the modern lifestyle did not exist and tradition was more alive.

The today’s culture of Crete is a mixture and a meeting of different features and a mix of different and not matching features. Both co-exist at the same time.

Even though it has changed, Crete can still offer many things and is a place that fascinates me.

You have mentioned that “the people of East still understand the holly dimension of music and are not trapped so much in the misunderstood view of the “personal expression” that the modern western culture has glorified”. Under which of the two schools Cretan music falls?

Cretan music is definitely under the musical traditions called “tropikes”. It comes from the word “tropos” that show a monophonic scale.

The phrase of Karamanlis, “we belong to the West”, may sound till today but the 90% of the culture of Greece has more characteristics of the East. Greece is separated even geographically from the European core.

In the beginning of the 20th century the island of the Aegean Sea had close relations with Izmir, Thesaloniki was close to Constantinople and Crete with Egypt. Greece started to connect essentially with Europe during the modern political history. So it is logical for the musical tradition to be related to the Eastern culture.

You have stated in an interview that the musicians are divided into two categories, those that they seem to say “Look at me” and those that they act like saying “Listen to her”. But the last years a turn to the musicians of “Look at me” have started due to the total loss of interest in the Cretan music- especially in the cities. Practically the lyre starts to get out of obscurity. Does that benefit Cretan Music?

In my opinion a person that is Cretan or lives in Crete and obtains a complete and serious education cannot discover the positive sides and parts of the Cretan music. So, generally, upgrading and improving the Musical education is necessary.

Mountakis told me that having a very good relationship with the tradition of your hometown does not make you untouched by other music.

In the past there were many important self-taught musicians that had identified their names with the different music schools. Today, even though the means and the ways of teaching and going deeper to the music art exist, there is a lack of important composers and musical ideas. How do you justify that?

Crete is an island and that is why it has a tension to introversion. By that, many things can be concluded.

Cretan music serves, almost, only entertainment and not recreation. It is not music for listening. It can be seen that the Cretans want to develop the other sides of music. That means that we also want to do the transition to the other side. It is not an easy transition and, maybe, we should see how the other people having done it dealt with it.

If music serves only entertainment, it is like hitting on a ceiling that has not something higher and Cretan music can develop more dimensions.

Discography of Crete does not help in that transition as it is an unsuccessful attempt to record the feast to a CD which is not possible, unfortunately.

Can Music be taught?

Of course! Even though many people believe that you were born a musician and you do not become one. They say “Mountakis or Skordalos did not have a teacher”. They lived in a time when only a few people were talented and managed to learn but they were very few in every society.

There were also other people that had a musical perception and, in order to develop and use it, they needed help. That was the average and I fall under that category.

So we can reach far with the musical education but, without it, we could not use our talent and skill.

Musical education can be true not with the exceptions but with the average.

You went from Ireland to Pakistan, from Pakistan to Turkey, from Turkey to different countries of the world. Are there are any basic differences between people?

No. People have similar characteristics wherever they are.

When they develop extra needs, apart from the basic, the differences create conflicts.

So the basic difference is the needs that do not agree with the essential human nature.

We met Ross as a musical traveler, an inspiration and creator of the Lavirinthos Musical Workshop. Using the title of the last CD, which is your other side? (“The other side”)

It is the same other side of all the people. I stated in the CD that, once, Djamchid Chemirani being asked about the origin of music answered, “There is an unknown side of every person, isn’t there? So music comes from that side”.

We sometimes think that a song belongs to us. But music has certain phonemes. All the things in music existed before as a mathematic possibility. We carry it but we do not create it.

We know that Lavirinthos faced difficulties. How are the things now?

I would say that many recent problems happened due to changes and led to difficult situations but, with the cooperation of the various institutions and the local community, we managed to find solutions that helped us to go on.

What should we expect from you in the future?

I will possibly find out about that with us…