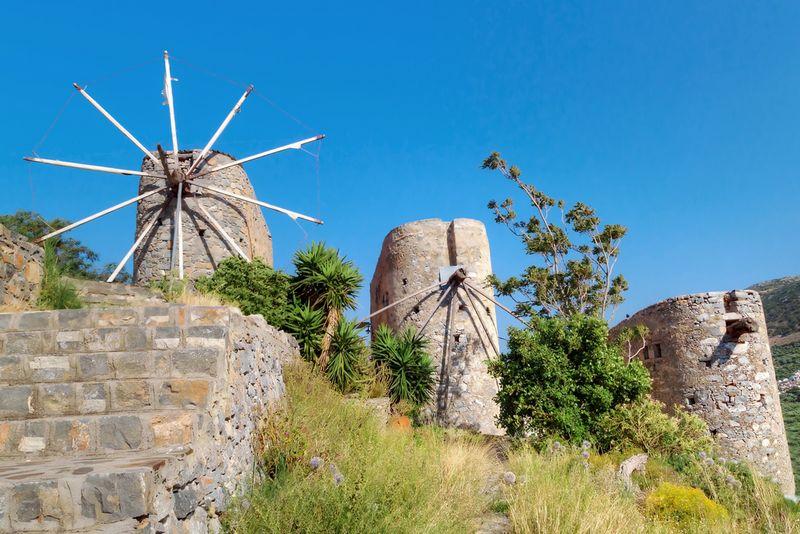 The picturesque Oropedio (i.e. plateau, in Greek) of Lasithi is the largest and the most fertile plateau of Crete and one of the most important places of Crete due to its natural beauty, history, myths and traditions.

Oropedio of Lasithi is one of the three plateaus of Crete (Nida plateau in the Idi Mountain, in Rethimno and the Omalos Plateau in Chania) and 817-900 meters above the Dikti Mountains. It is an oblong plateau, 10 kilometers long and 5 kilometers wide. One of the largest rivers in Crete, Aposelemis, flows through the area and ends to the Aposelemi dam.

The Kefala hill is in the eastern side of the plateau and is divided into two parts, the eastern and the western. The western part is bigger and has too much water.

In the 1950s and 1960s the plateau was one of the first wind farms in Europe with about 16.000 windmills that drew underground water. They were made by the Venetians and the settlers from Peloponnese in the end of the previous century. There are very few windmills today.

The main occupations of the residents of the area are agriculture, livestock and rural tourism. There are traditional taverns in most of the villages and traditional guest houses in some of them (Tzermiado, Agios Georgios, Agios Konstantinos).

The plateau is surrounded by the high and imposing mountains of the Dikti Mountain, creating a natural fortification to the 18 villages that are built in its perimeter. The villages are connected with an almost circular road, 25 kilometers long. The settlements of Avrakontes, Koudoumalia, Agios Georgios, Agios Konstantinos, Kaminaki, Kato Metochi, Agios Charalampos, Lagou, Pinakiano, Marmaketo, Farsaro, Mesa Lasithi, Mesa Lasithaki, Plati, Psichro, Magoulas and Tzermiado(its seat) are under the Oropedio of Lassithi district.

The access to the plateau is done by certain roads due to its natural fortification style. The first one is in the north-east of Patera ta Selia and is connected with Agios Nikolaos and the second one is from the Seli of Ampelos that is connected with Heraclion.

The visitors and the tourist follow those roads in the winter, when the area is white by the snow, and in the summer, in order to enjoy the beautiful place with its interesting sightseeing.

Reaching the plateau, you will see traces of a draining system with straight ditches made by the Venetians in order to remove the water that covered the area for two centuries. These straight lines are called “Linies”, which came from the Latin words “ligna”, “linea”.

The Kristallenia and Vidiani Monasteries, the smaller plateaus of Katharo, Nisimos and Limnakaros, the unique Chavgas gorge, archaeological sites and the Cretan Folklore Museum, the Natural History Museum and the Eleftherios Venizelos Museum are also worth visiting. There are also many caverns, such as that of Diktaio Andro in Psichro and Kronio or Trapeza in Tzermiado.

The findings of the area show that the plateau of Lasithi has been inhabited since the Neolithic Era. It was an important ancient worship station in the Minoan Period.

The most ancient written reference of “Lasithi” was in the “Carta Conscessionis” (a deed of transfer document), in 1211.

During the Venetian Occupation, in 1293, Oropedio of Lasithi was declared as an uninhabited place, after the proposal of the Duce of Heraclion in the Council of the Lords. He was furious because the people of Lasithi destroyed things, rebelled and then found shelter in the plateau. So the plateau had been uninhabited for 2 centuries.

In the 15thcentury, the Venetians increased their army in the island in the fear of a Turkish invasion. The increase of the population and the infertility of the cereals caused a food shortage. Then the Duke of Heraclion proposed to Venice that the area of Lasithi should begin to be cultivated again under the control of the Venetians or by renting them as the situation calmed down.

During the Turkish Occupation the plateau was never inhabited by the Turks but was under large destructions.

Races called “Diktaioi Agones” are held every year in the plateau during which the athletes make the round of the plateau.